For a few weeks last month it was near enough impossible to find either tinned foods or toilet rolls in the supermarkets as people had a bit of a pre-lockdown panic and demand massively outstripped supply. Thankfully things (and indeed people) have calmed down a bit now, with both shops and shoppers getting used to the new normal. 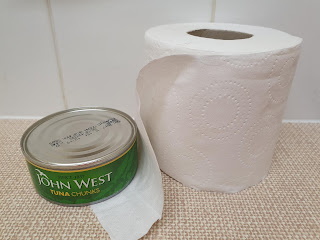 Which is a relief, because if you've got a tin of tuna and a toilet roll, plus a lighter and some outdoor space, you've got the basis for an extraordinarily tasty meal. Sound bizarre? Yes it is, but let me explain.

I recently read an article by Shaul Armony, a former member of the Israel Defence Forces, in which he bemoaned the terrible state of the food on offer to its soldiers, both when at base, where quantity very much came before quality, and when out in the field, where a week's ration pack typically included 6 tins of tuna, one tin each of pickles, beans, corn and fruit salad, and a bar of halva. In his own words, "after a while, tuna gets old. Real old."

His solution to make the tuna more palatable? Burn it. Literally, set the whole thing on fire, to transform it "from a one-note, dry, chalky mouthful to a deep, smoky, juicy party in your mouth." Well, that's not a promise you get faced with every day. Clearly this had to be tried.

The process is simple enough - take a tin of tuna in oil (and it must be in oil; it won't work with tuna in brine, spring water or any kind of sauce), and open outside in a safe environment. Do not drain off the oil. 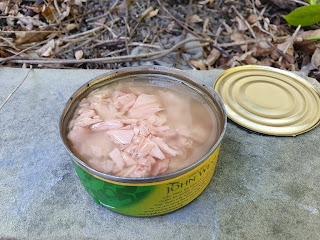 Take three or four sheets of toilet paper, stack them on top of one another and press into the top of the tin so they start to soak up the oil, but with the edges sticking up around the sides of the can. 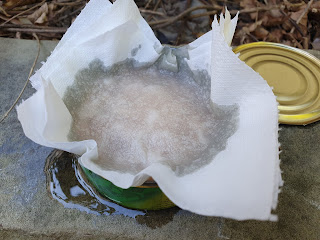 Set light to the edges of the toilet paper, then sit back and relax as the tin starts to burn. The paper acts like the wick in a candle, soaking up the oil and allowing it to burn off like the wax - but here it has the added bonus of cooking the tuna from the top down. I suppose flame-roasting is the nearest equivalent, but using a lot more oil than you would normally. The combination of burning paper and cooking fish also lends a lovely barbecue smell to the occasion. 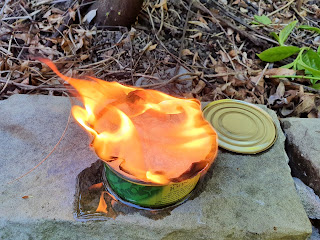 The process can take between 15 and 30 minutes - the flames on mine were still going well after 15, and it was probably nearer 25 before they were starting to die down. I probably could have left it going for longer, but the smell was making me ravenous by this point, so I carefully blew it out. It might be possible to use the removed lid of the tin as a makeshift snuffer, but I didn't think of that until later. 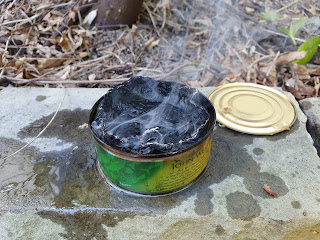 Allowing the tin to cool slightly, you then remove the charred paper with a fork, pour off any remaining oil, and dig in. 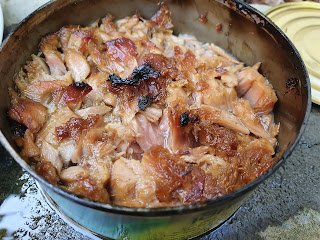 And oh my goodness me, it really is a tuna game-changer. If you claim not to like tinned tuna, you need to try it like this. The chunks at the top had charred to the most deliciously crisp, juicy morsels - think of the flavour of the lovely tasty scrappy bits stuck to the bottom of the pan when you fry a piece of fish, and now imagine entire chunks of tuna like that. The pieces were less crispy the nearer the bottom of the tin I got, but were still warmed through and suffused with the lovely smoky barbecue flavour. 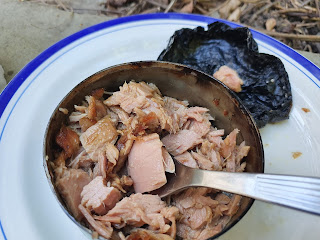 For the true army experience, Armony suggests serving with "canned pickles, corn and fruit cocktail, or whatever your heart and stomach desires". I had made a bit of salad, and had brought some crackers outside in case I thought it needed them, but in truth the tuna was so delicious that I wolfed most of it down straight from the tin down before even thinking about anything else to go with it. 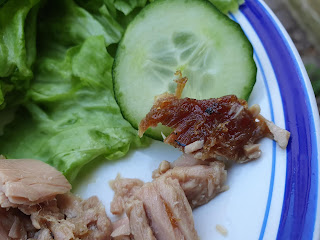 I would try this again in an instant, and highly recommend giving it a go. Maybe salmon or mackerel would be good too - as long as it is tinned in oil, it should work exactly the same. The idea may have been born out of an attempt to make the most of a bad situation - i.e. some boring rations - but the result is a genuine triumph!


Addendum: Some time ago I had also seen a video online which showed how it is possible to open a tin without a can opener, simply by rubbing the top of the tin vigorously against a concrete surface, until the seal breaks, and the top of the tin can be squeezed to 'pop' the lid off. I tried this with the tuna can above, seeing as I was already outside and near some conveniently-placed concrete, but had absolutely no success whatsoever. Admittedly they don't actually say in the video how long you need to rub it against the concrete for; being somewhat impatient, and keen to get underway on the burning of the tuna, I may have given up and resorted to using my trusty can opener too quickly. But it's a good trick to know if you ever do find yourself starving, with a tin, but without any means to get into it. If you watch the video, try it out and have any success, do let me know! TTC

Posted by The Tin Cannoisseur at 14:55